One problem with logarithmic notation is that it is not intuitive, because the better the vision the lower the acuity value. Thus, the very best acuity values are negative. To solve this problem, Bailey proposed an alternative notation method based on the following formula: 2

Which consists of subtracting from 100 the value obtained by multiplying the VA log by 50.

With this notation a value of “1” is assigned to each letter, and we add the value of all letters that the patient has successfully identified. Each line has five letters, so 5 points are added if all letters are seen. A VA of 6/6 (20/20, or 1.0 in decimal notation) corresponds to a logarithmic value of 0 (not very intuitive) whereas the VAR notation assigns a value of 100 (much more intuitive). If the patient reads a letter incorrectly, the value of his VA would be 99, two incorrect letters yields a score of 98, and so on. On the other hand, the patient gets an additional point for reading any letter smaller than 6/6 (20/20, or 1.0 in decimal notation). For example, 6/6 +2 becomes 102 VAR, a value that is sensitive, standardized, and intuitively understood as “better”.

Thus, this system maintains the advantages of logarithmic notation, but avoids negative values, is very easy to calculate and offers a more intuitive number, which the patient can easily understand (higher values indicate better acuity).

For example, the letters that a patient has identified correctly are shown below: 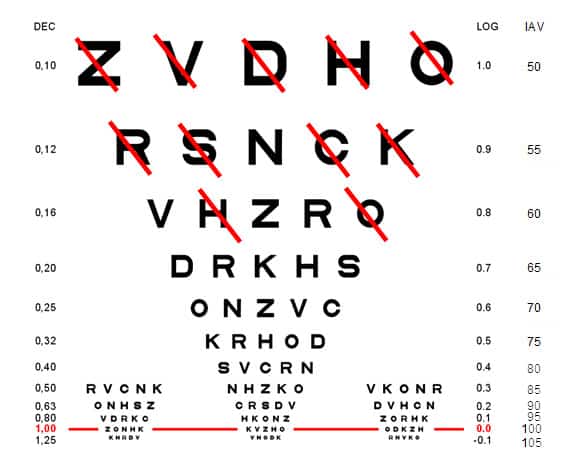 Using the method described above, the logarithmic VA in this example is 0.88 log units, while the Visual Acuity Rating is 56 VAR.