The Symmetrical letters VA chart is specifically designed for paediatric visual assessment; letters are presented in single lines of 5 letters with constant contour interaction (it is recommended as a standard VA system for preschool and young age children).

Linear visual acuity with symmetrical letters (instead of symbols) provides a reliable and testable method of measuring VA in children from the age of about 2.5 years to 7 years.4,5, 6, 7 Furthermore, the task employed is similar to international standards for VA testing employed with adults.  Therefore, using symmetrical letters VA charts will ease the transition and comparison between tests designed for children and those designed for adults.

The letters O, X, H, T, U and V8, 4, 6 are easy to match, and are employed in the Optonet Vision Unit. The vision unit allows displaying a single line of five symmetrical letters with crowding bars: 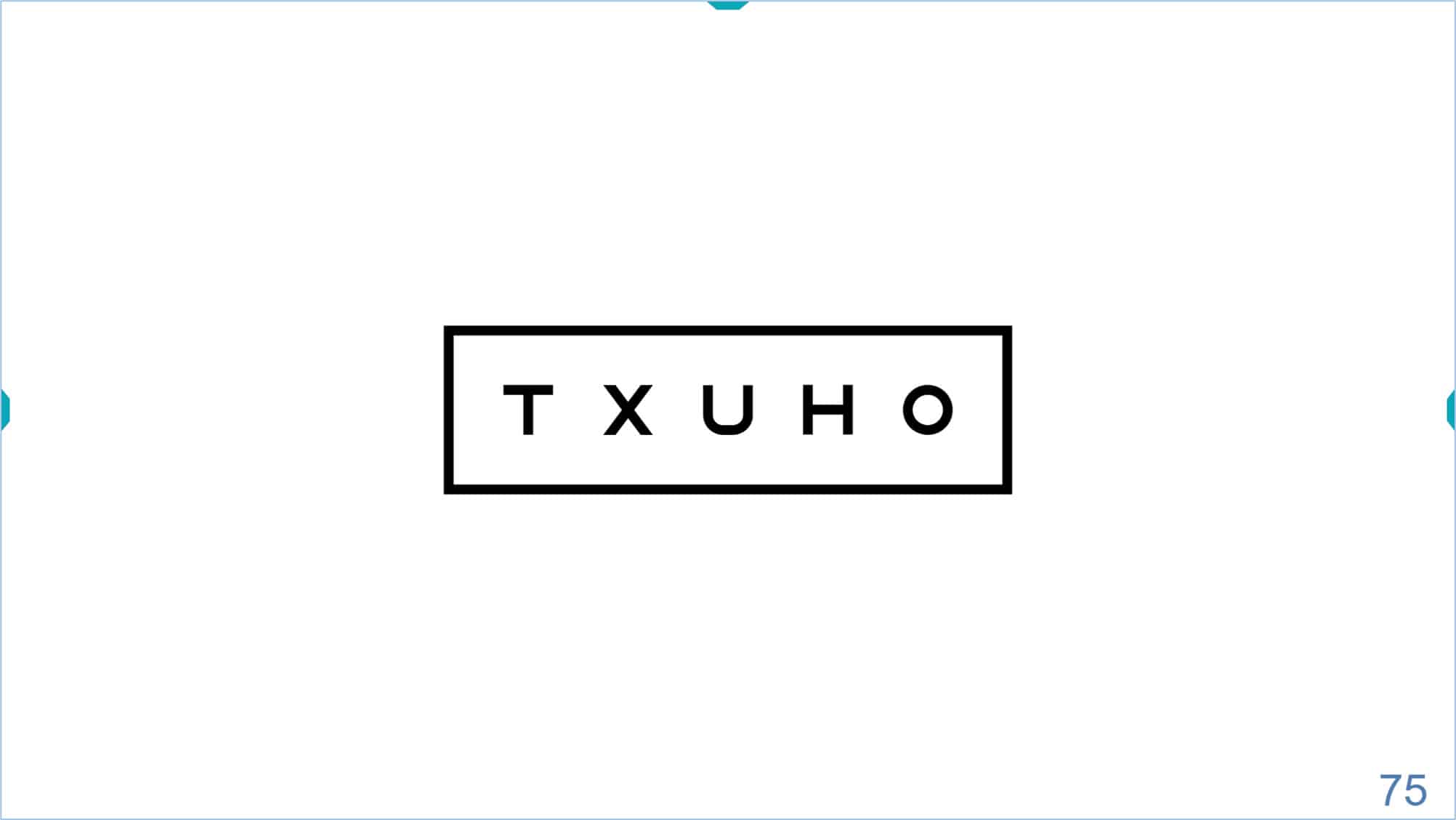 A test distance of 3 meters is recommended for VA testing to guarantee a greater collaboration, especially in younger or less motivated or intimidated patients.9

Prior to VA testing, training in letter matching is also recommended for younger children and for those unable or unwilling to name letters. The child is asked to identify and point to the same letters on a “matching keycard” that are shown on the computer screen, without having to name them. The matching key card consists of a sheet with printed symmetrical letters. 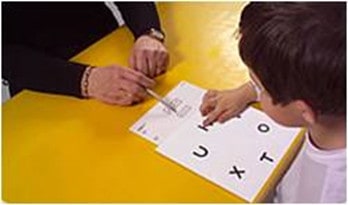 Training in letter matching is required before VA testing; this can be carried out by the practitioner or by the parents. It can be very useful for the child to practice at home with their parents before the visual examination. For that, a printed “Matching Kit” is given to the parents.

This training could also be carried out with a digital animation that it is included in Optonet Webpage: https://optonet.co.uk/practice-visual-acuity/ 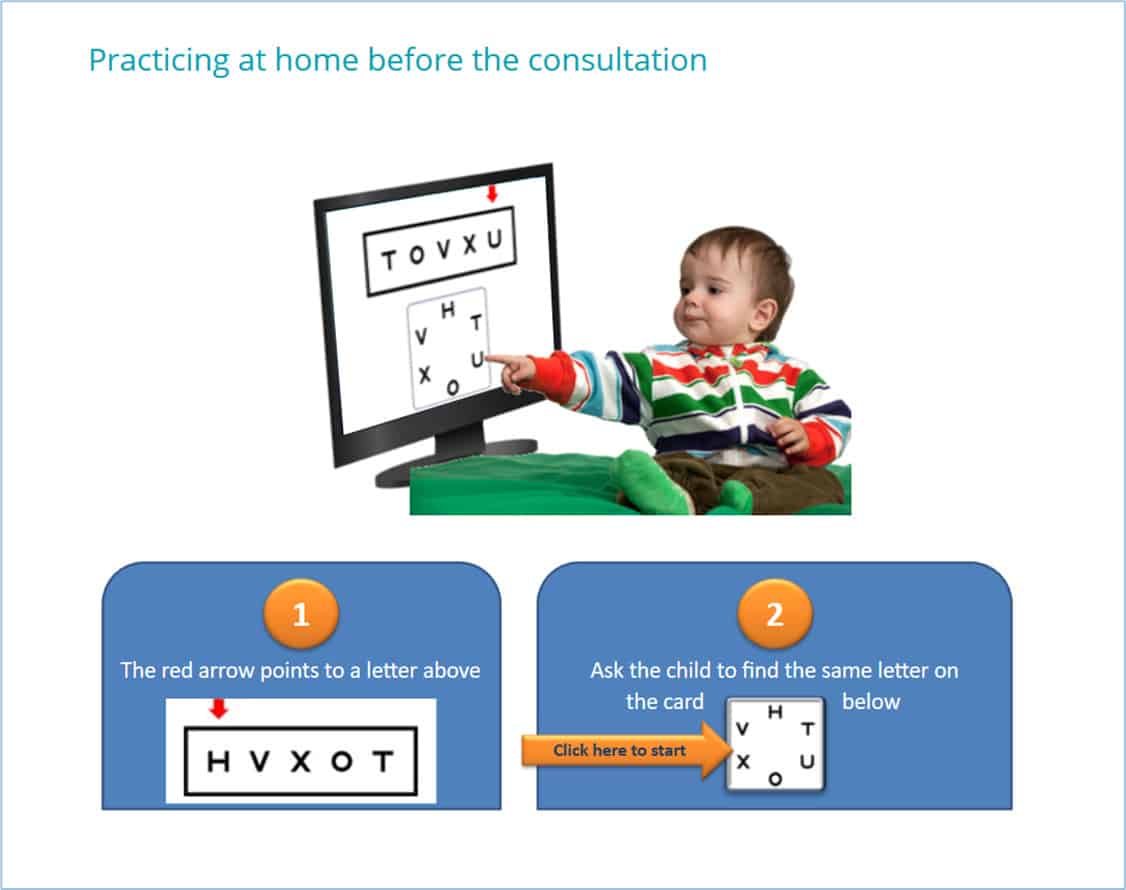 Whatever the method employed, the child will easily learn the dynamics of visual acuity testing, and his/her response to VA testing will improve significantly.

Similar to VA testing in patients > 8 years old, a modified fast procedure is employed to measure VA in children. This fast procedure consists of asking the child to read one isolated letter (surrounded by crowding bars) per VA level until a mistake is made.3

Once the child has made a mistake, he/she is presented a single line of five letters (with constant contour interaction) of the preceding VA level and required to read the whole line, with no mistakes. We expect the patient to read correctly five letters of this row. If the child makes one or more mistakes at this starting level, he/she will be shown the preceding larger row. This step must be repeated upward every time the subject makes any error.

When a row is read correctly with no errors, the fast procedure becomes identical with the standard, i.e., asking the child to read all the rows downward until four or more mistakes are made on a line of five letters or symbols.1

This procedure significantly reduces test time, avoid tiredness and yields results that are as accurate as those obtained with the standard method.3 This is particularly important since attention and cooperation time is limited in this age group.

It is recommended to start the VA testing binocularly (both eyes open) to build confidence in the procedure.

The Optonet Vision Unit allows isolation of letters, by simply clicking on the letter “L” of the keyboard ((L)etter) (or → arrow) and then “C” for (C)rowding. A single letter surrounded by bars is shown: 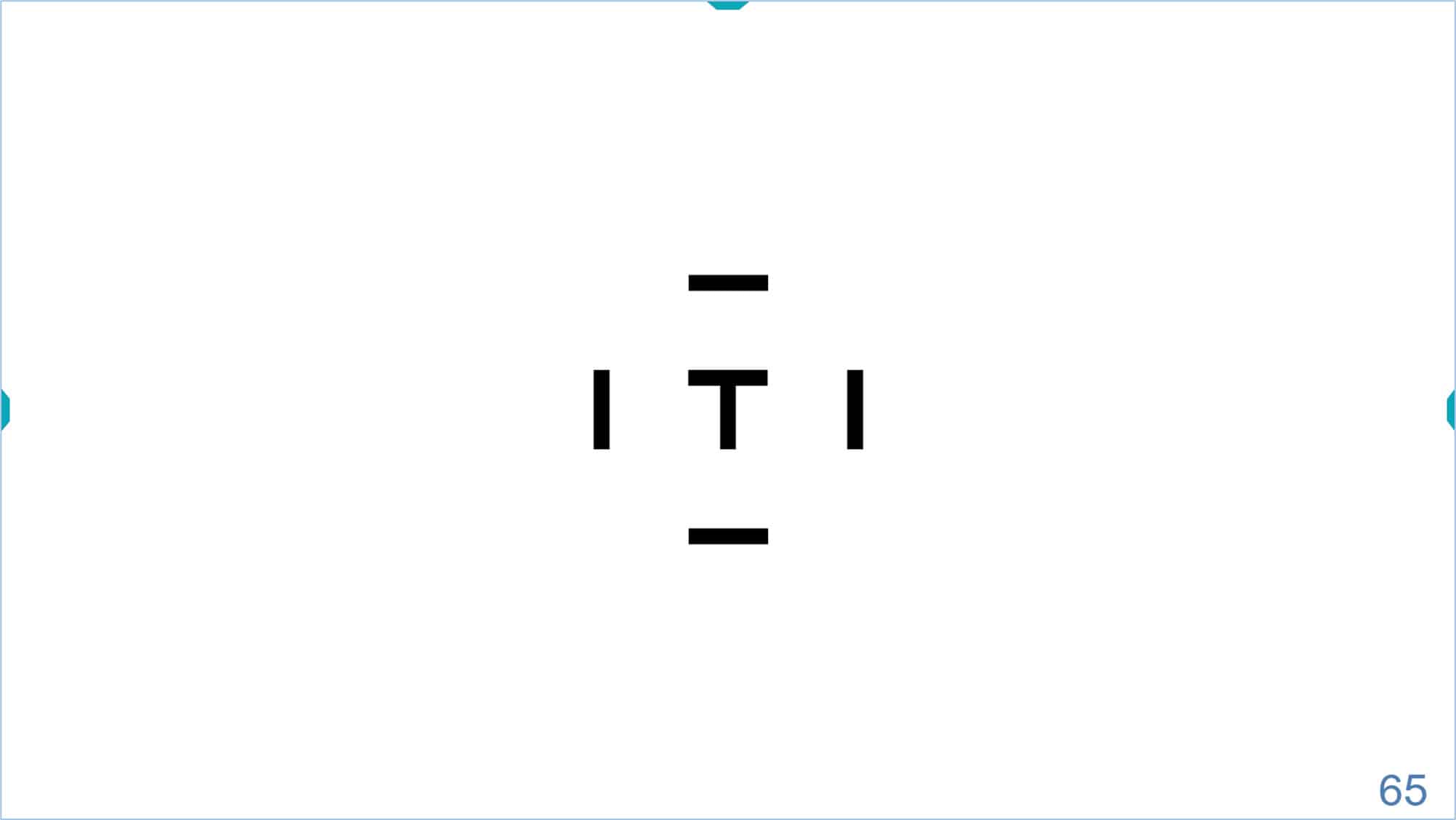 Let us see this procedure through an example:

First, the patient is asked to read down isolated (single) letters binocularly (both eyes open) until a mistake is made. Let us assume that the first letter that the patient is unable to read correctly is the “X” which represents a VA of 75 VAR (Snellen 6/19, 20/63), as shown in the following figure (the VA value is shown in the lower right corner of the screen) (70 VAR can be recorded as binocular VA for single letters in this example). 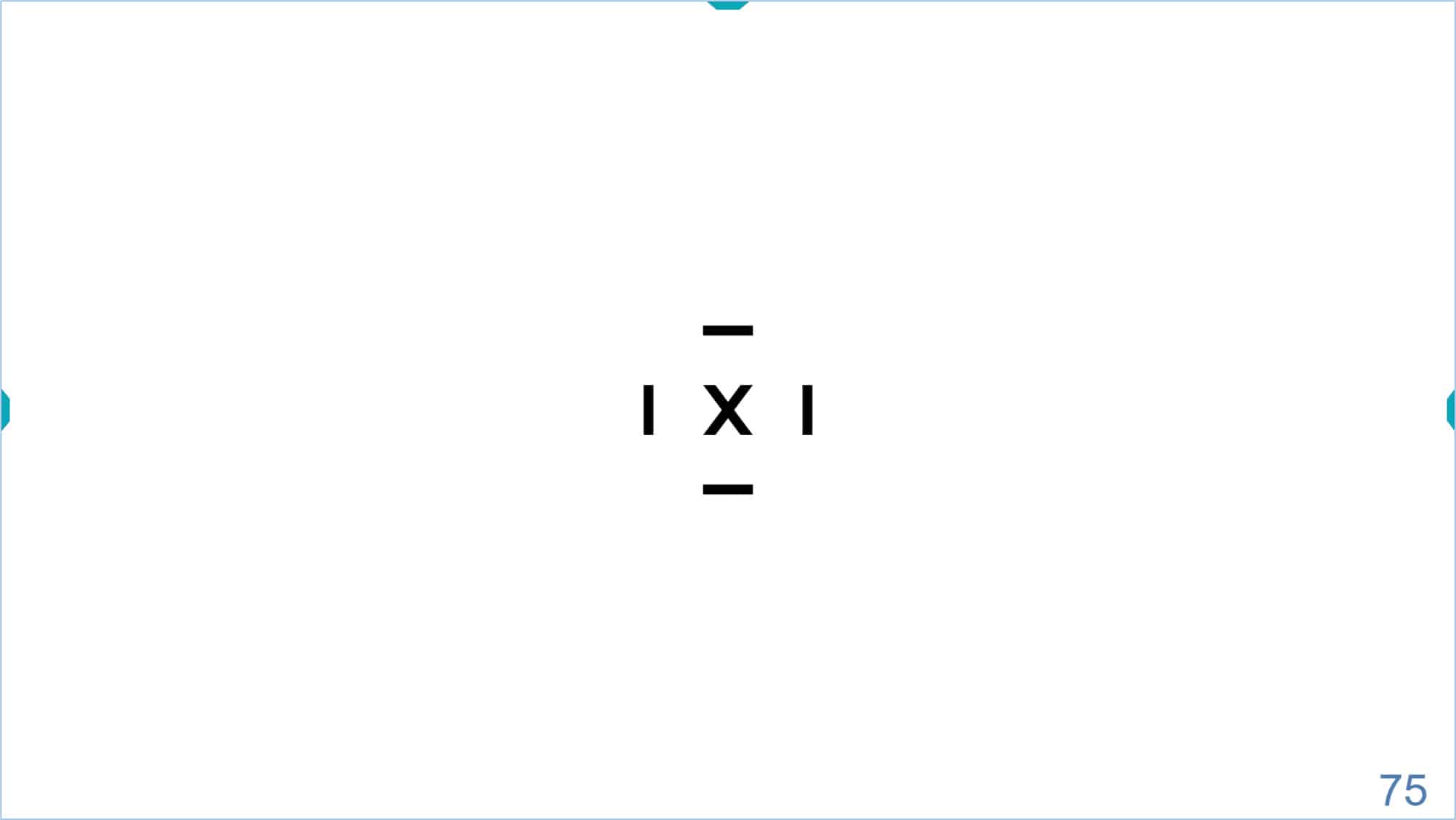 The child is then asked to read monocularly a single line of five letters (with constant contour interaction) of the preceding VA level, i.e., 70 VAR, by simply pressing on the “R” key (from (R)ow) (or the “Enter” key) and then on the up ↑ arrow key (or  “+” key) to adjust the size of the letters to the preceding level of VA (70 VAR as shown in the next image). 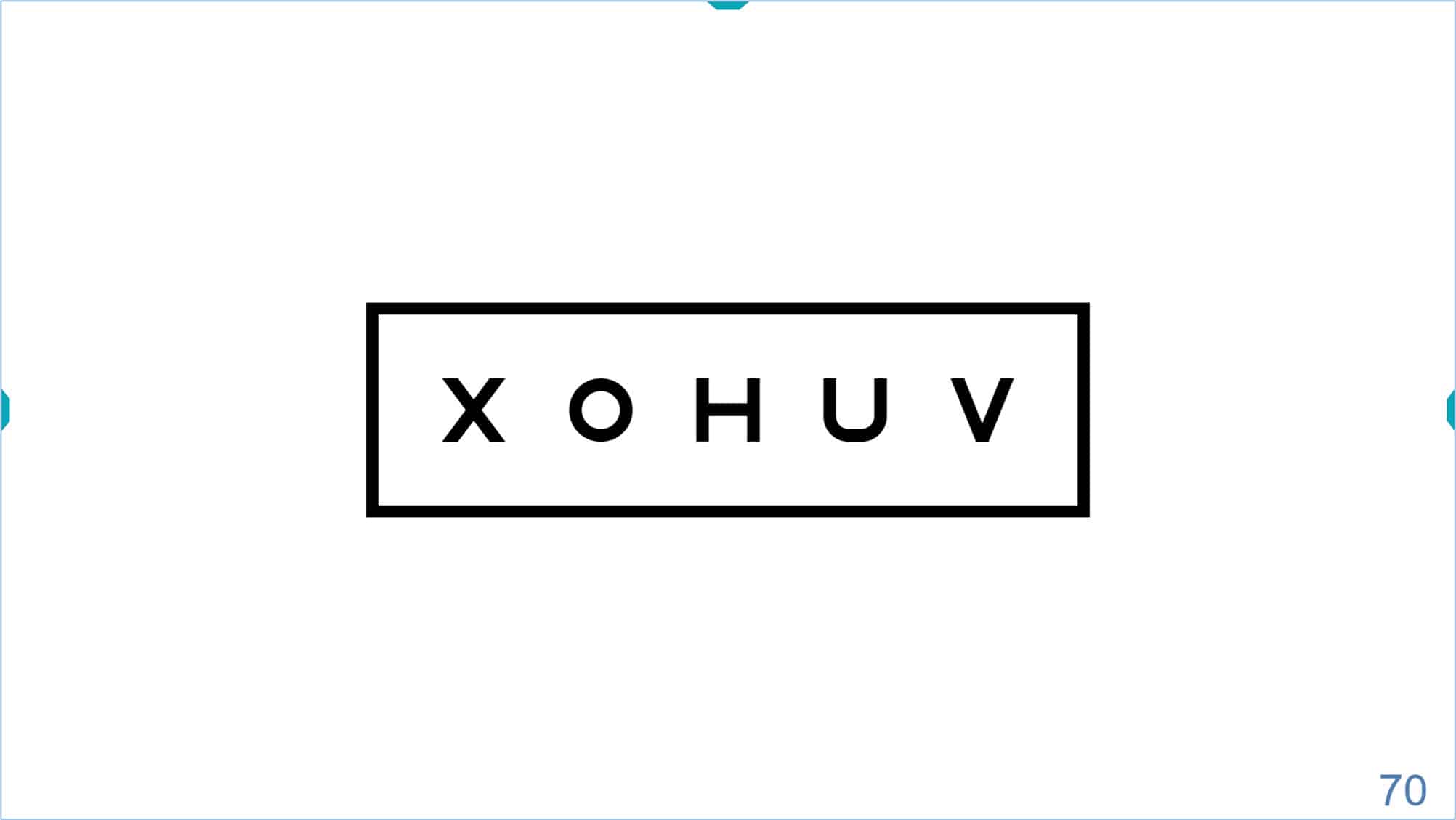 If one or more mistakes occur in this row, the patient will be asked to read the preceding row, (i.e., no mistake is allowed in this first row). The examiner will count the number of letters correctly identified by the patient and will press this number on the computer keyboard (as we have said, we expect to be the number 5).

Suppose the child read the whole line correctly and by pressing the number 5 on the keyboard the automated VA measurement will be started. The single line will decrease automatically in size and the patient will be asked to read this new smaller row of VA 75 VAR. 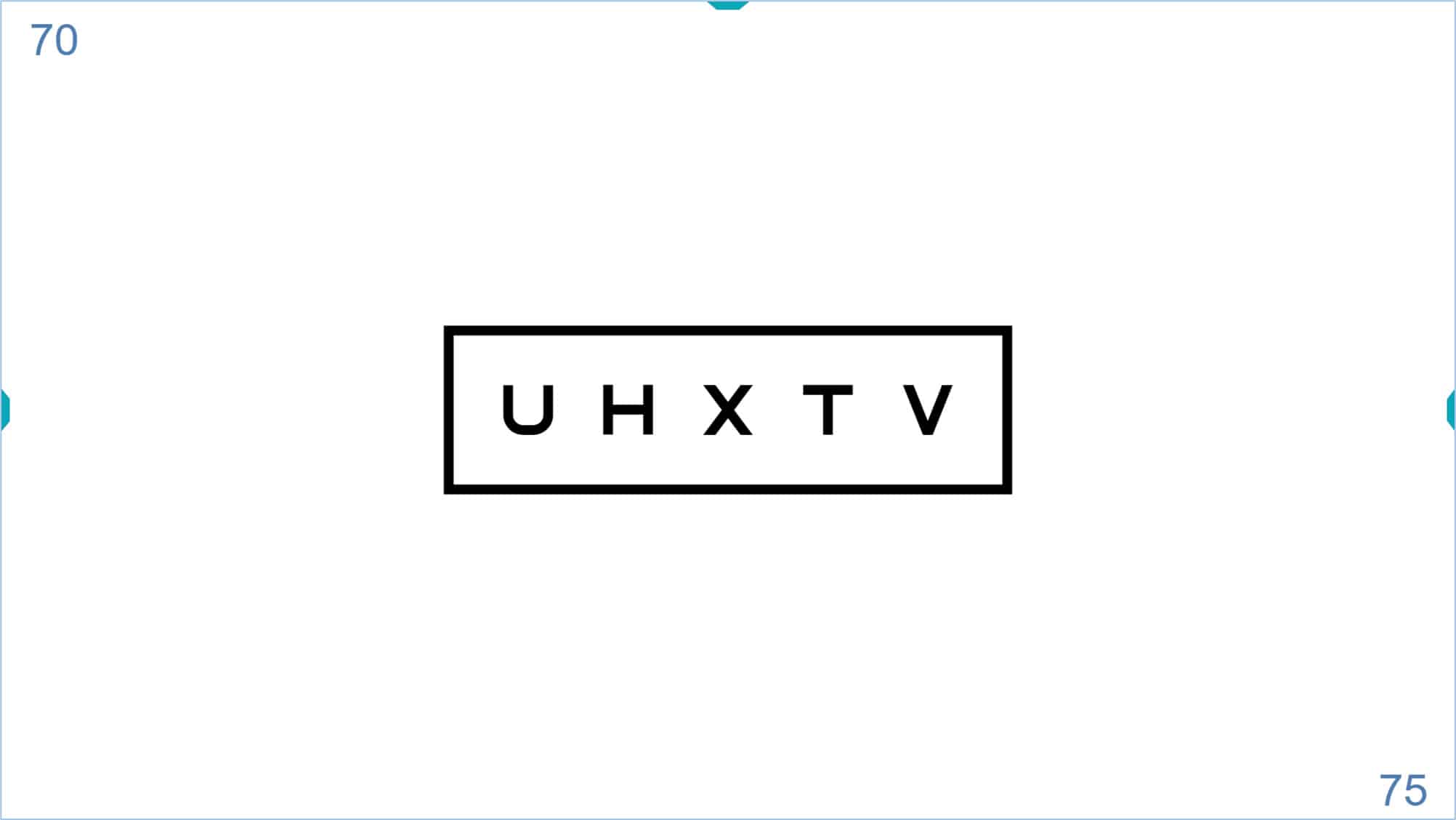 The above picture also shows the provisional automated VA score in the upper left corner of the screen (70 VAR), since the child could read all letters from the preceding row of VA 70 VAR.

Suppose the child can read correctly just three letters of the row of VA 75 VAR. Therefore, the number “3” will be pressed and the following screen will be displayed with an additional row of letters (VA: 80 VAR). The upper left corner also shows the provisional VA score (70+3) = 73 VAR. 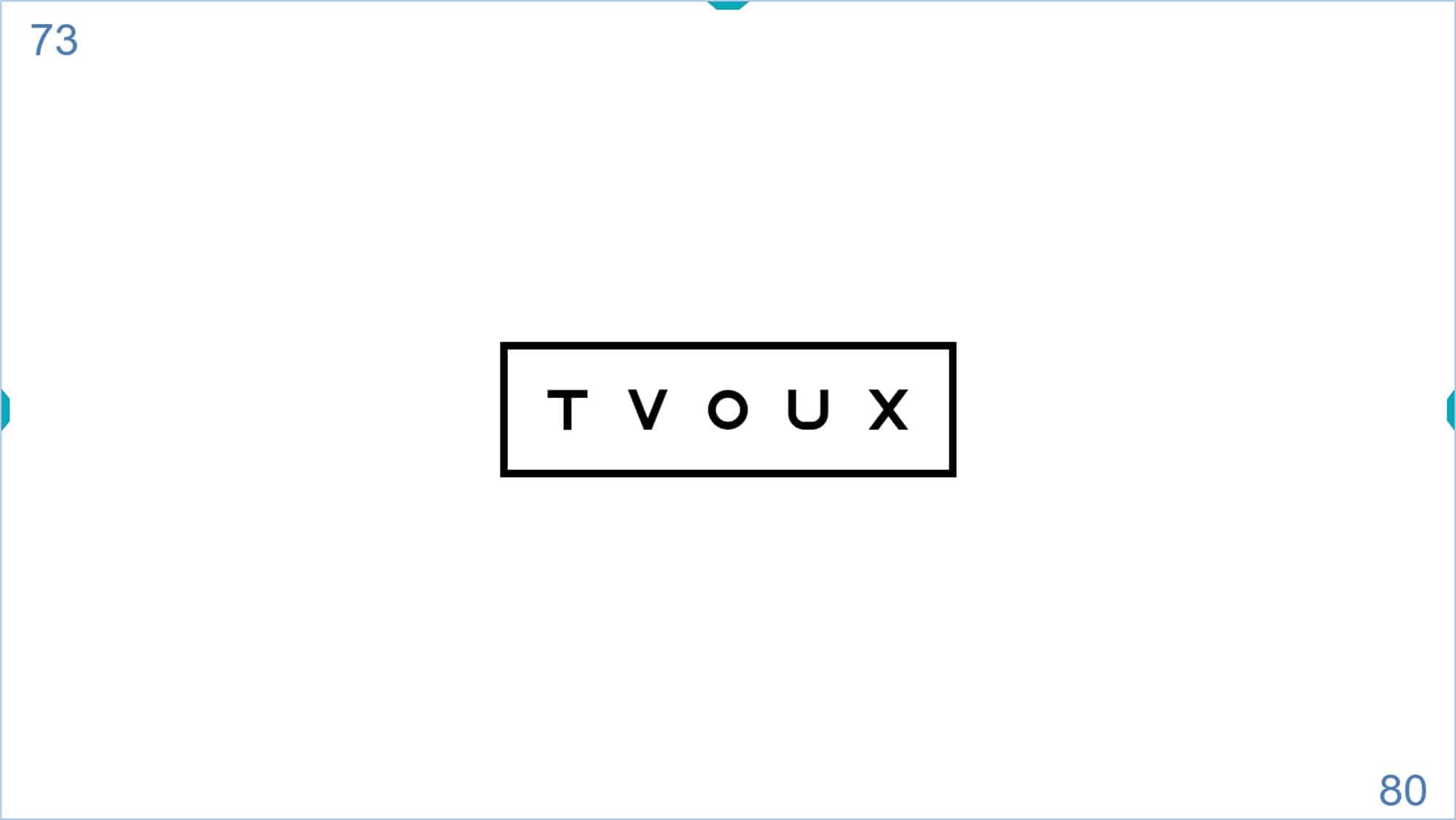 Suppose the patient misses all letters of the new row of 80 VAR, then the number “0” will be pressed. At this point the VA score results will be displayed in the five different notations: LogMAR, Decimal, VAR, Snellen (metric) and Snellen (imperial). 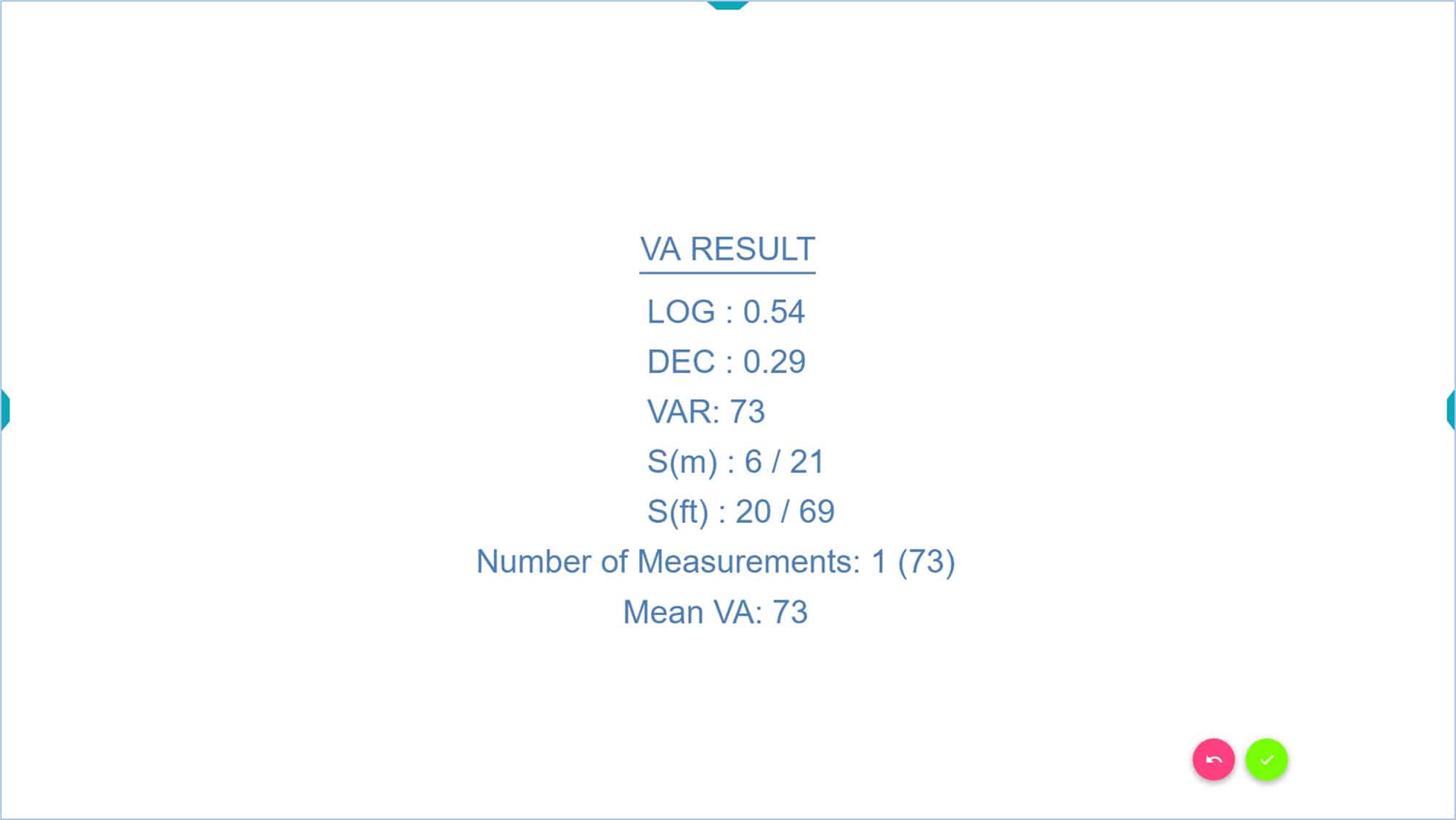 Once the automated VA measurement begins, the examiner presses the number of letters per line correctly identified on the keyboard (from 0 to 5). If, for any reason, another key is pressed the automated calculation is cancelled, and should be restarted.

It is recommended that at least two consecutive measurements of VA are taken per eye, and then averaged. Accordingly, once the first measure is completed, the examiner presses the “Enter” key to return to the VA chart. Conveniently, after pressing the Enter key the row of letters from which the automated system was previously started will be shown on the screen (in our example 70 VAR), but with a different combination of letters to avoid memorizing (see next image). 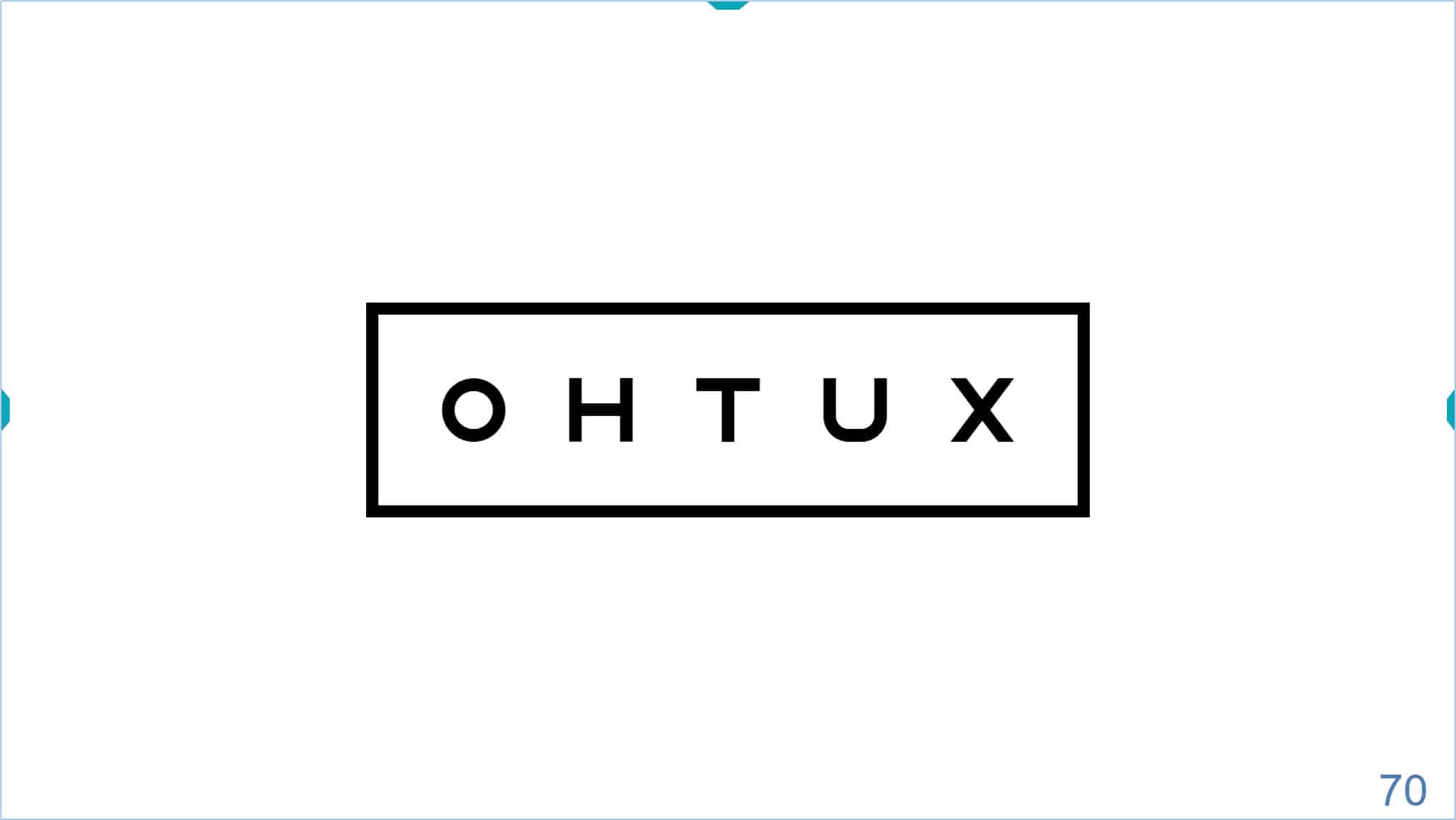 Then the automated measurement can be repeated and the unit will calculate the average VA and Standard Deviation values after each measurement. 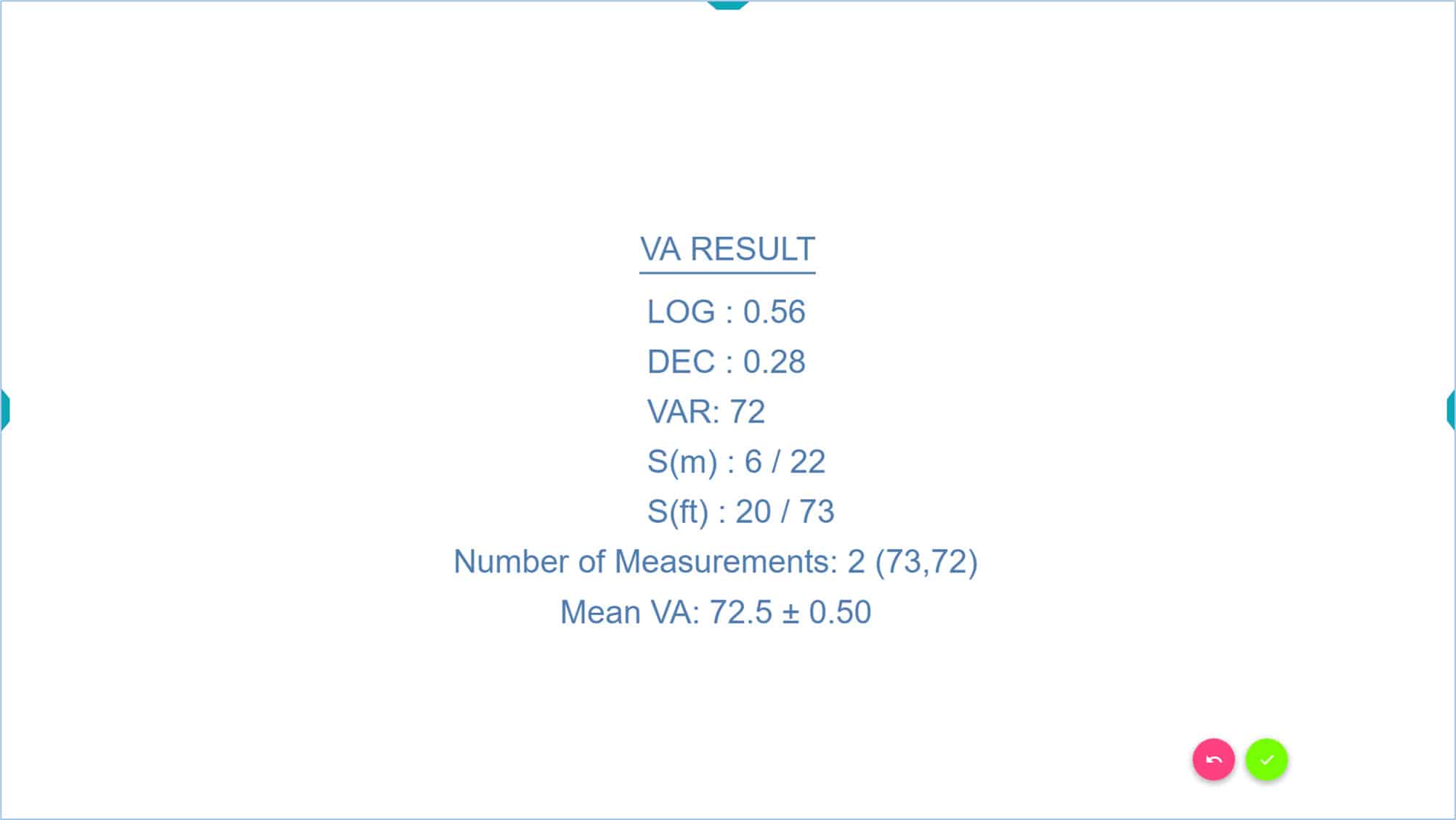 This allows for quick, consecutive, automated measures of VA as the process is repeated from the same row of letters.

Some children easily memorize the letters. When changing the eye under evaluation, the distribution or combination of the letters should be changed randomly by pressing the “Z” key.

It should be noted that the automated VA measurement method can only be started from rows showing five letters (or symbols).

The automated VA measurement can be stopped any time by pressing the “Escape” (Esc) key to return to the VA chart starting screen.