Note: In the present protocol, the VA testing procedure is explained by using a computer keyboard (ideally a wireless mini keyboard). However, all functions can also be accessed using the Remote Controller app with a tablet (Android or Apple).

Although the standard method for measuring VA with logMAR charts requires the patient to read all the letters beginning with the top row, a modified “fast procedure”3 is chosen in the present protocol. The fast procedure consists of first asking the subject to read only one letter per row until a mistake is made.

The Optonet Vision Unit allows to isolate the central column, by simply clicking on the letter “T” of the keyboard (cen(T)ral), or ← arrow, as shown in the next image: 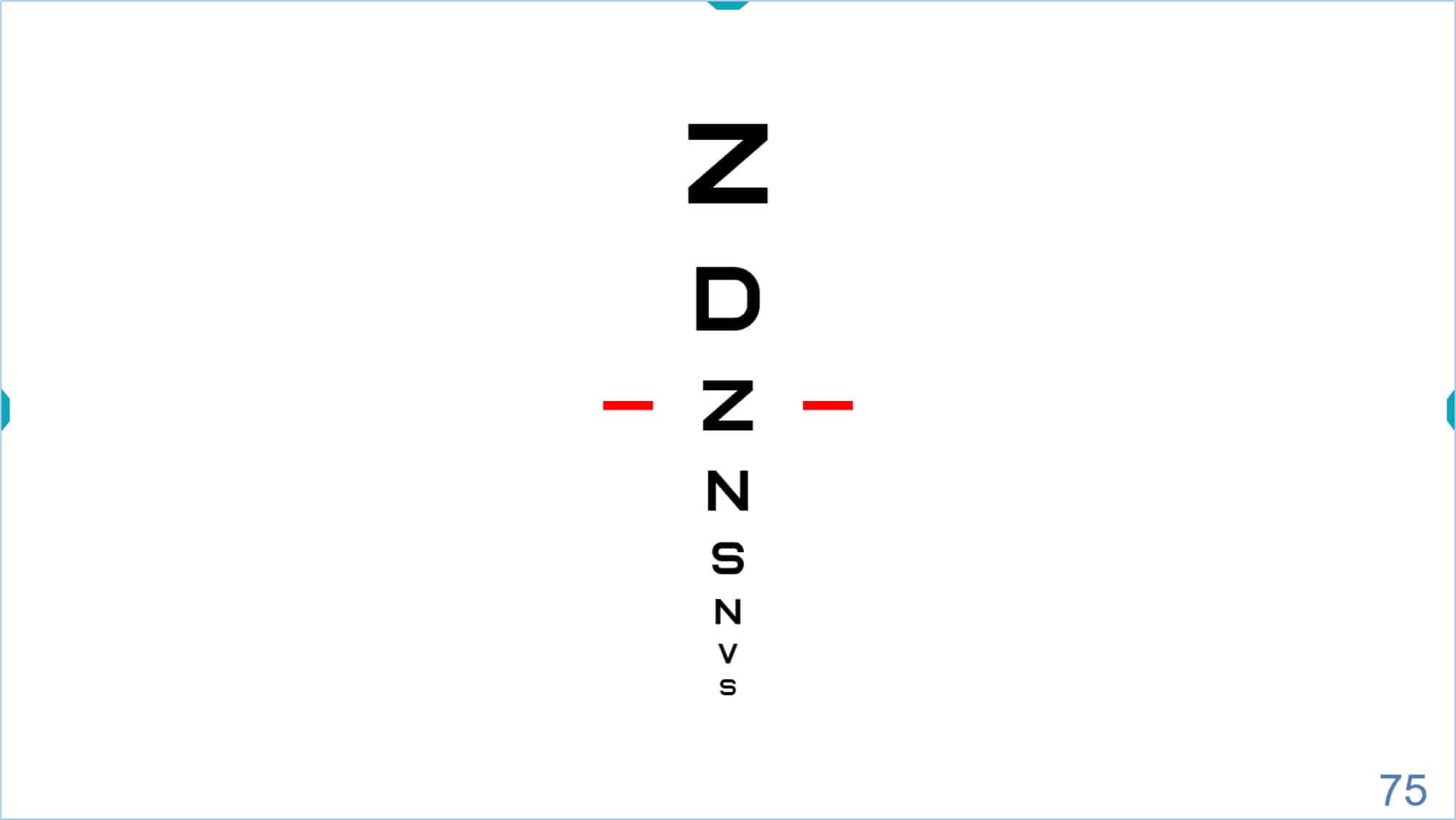 When a row is read correctly with no errors, the fast procedure becomes identical to the standard, i.e., asking the subject to read all the rows downward until four or more mistakes are made on a line of five letters or symbols.1

This procedure significantly reduces test time and yields results that are as accurate as those obtained with the standard method.3

Let us see this procedure through an example:

First, the patient is asked to read all the letters down the isolated central column until a mistake is made. Let us assume that the first letter that the patient is unable to read correctly is the “S” which represents a VA of 100 VAR (Snellen 6/6, 20/20, 1.0 Dec), as shown in the following figure (VA value appears in the lower right corner of the screen): 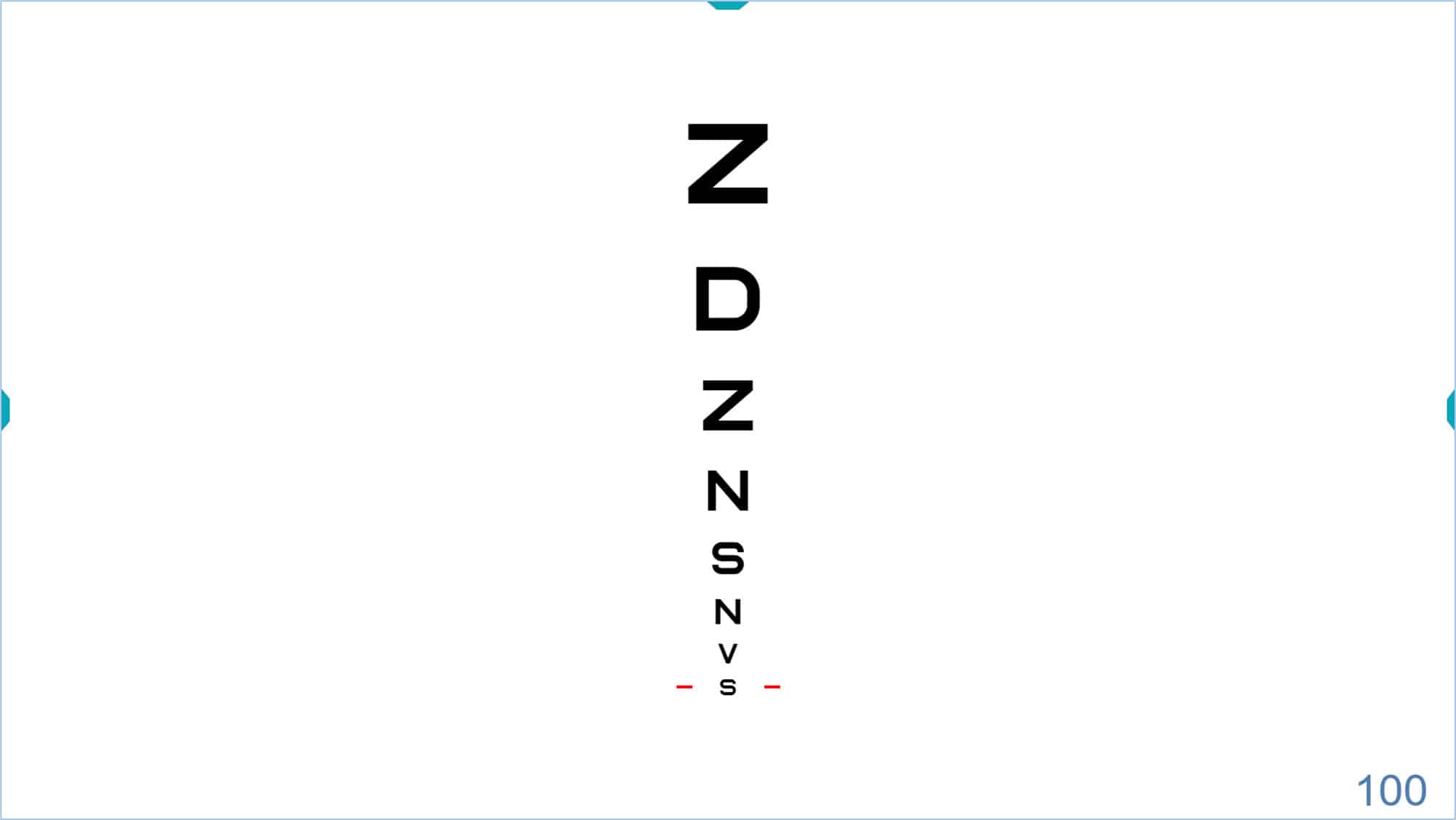 Once the patient makes the first mistake, the “T” key is pressed again (or ← arrow) to display the entire VA chart. The red lines will be shown either side of the row (in our example with a VA of 100 VAR): 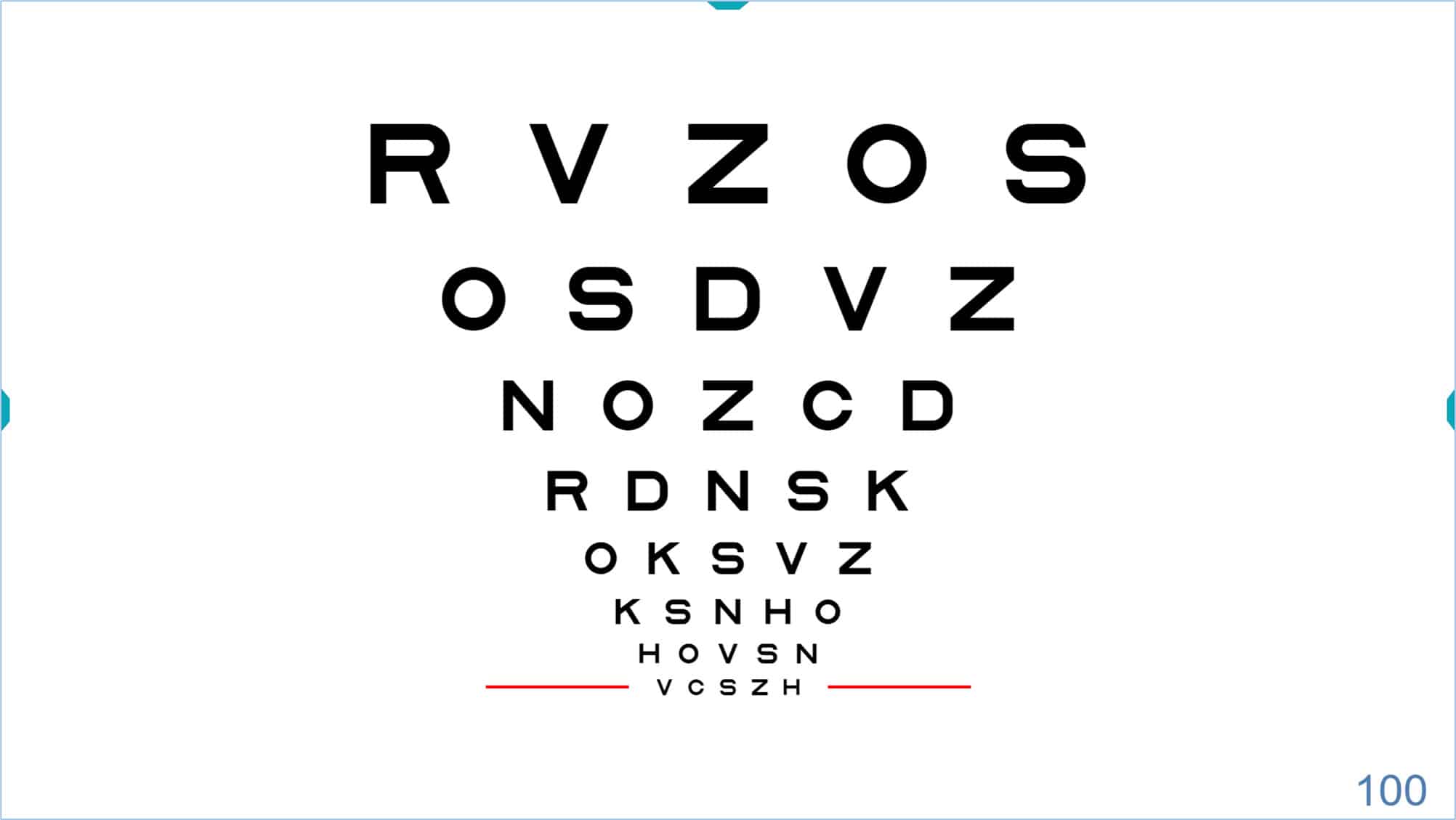 The red lines should now be moved a step upwards to the above row and the patient will be asked to read the whole row selected (VA 95 VAR). 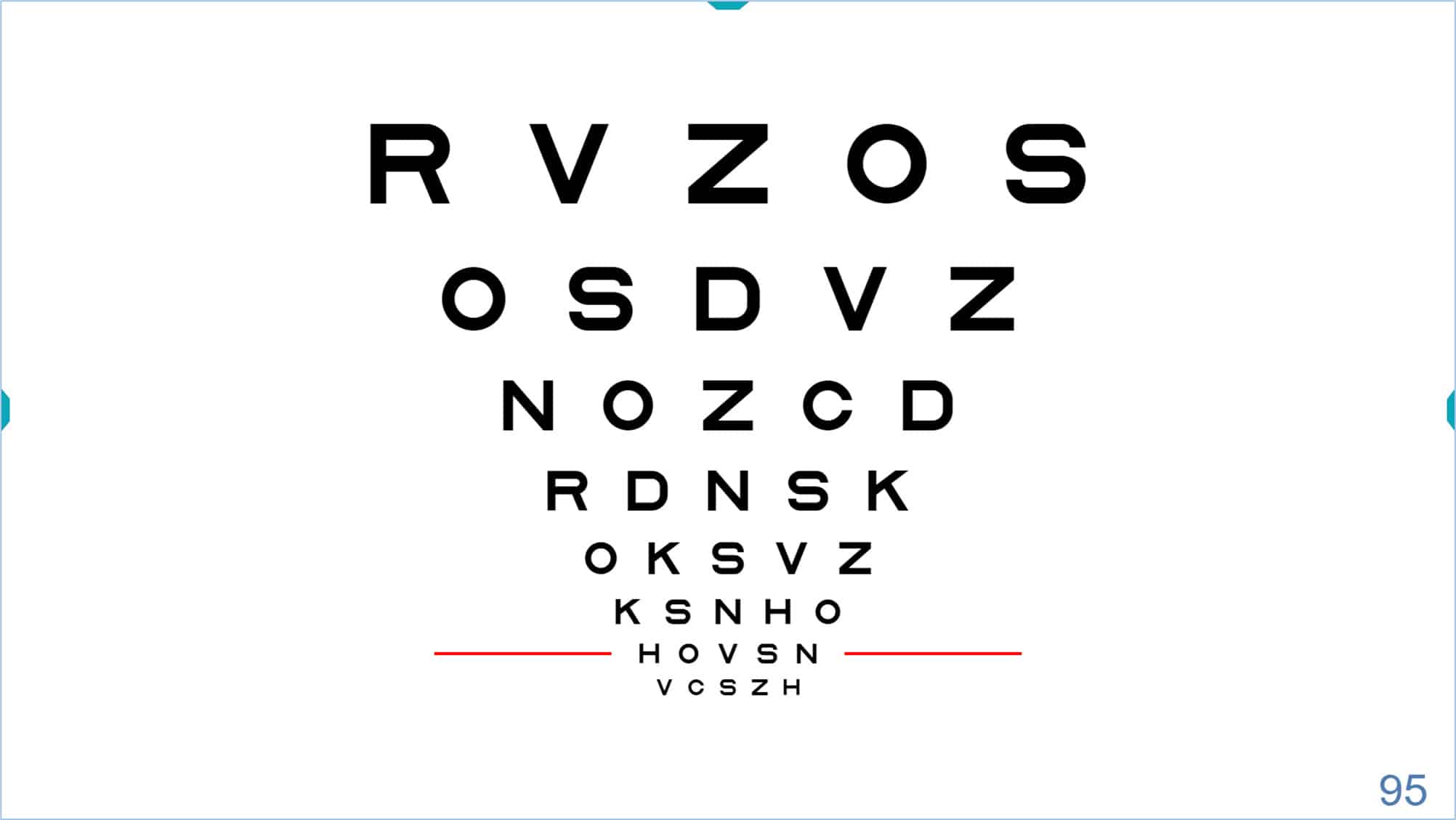 If any mistake occurs in this row, the patient will be asked to read the preceding row (i.e., no mistakes are allowed in this first row). The examiner will count the number of letters correctly identified by the patient and will press this number on the computer keyboard (expected to be the number 5).

Let us suppose that the patient reads the whole line correctly and therefore by pressing the number 5 on the keyboard the automated VA measurement will be started. The red lines will drop automatically to point to the row below, and the patient will be asked to read this new smaller row of VA 100 VAR. 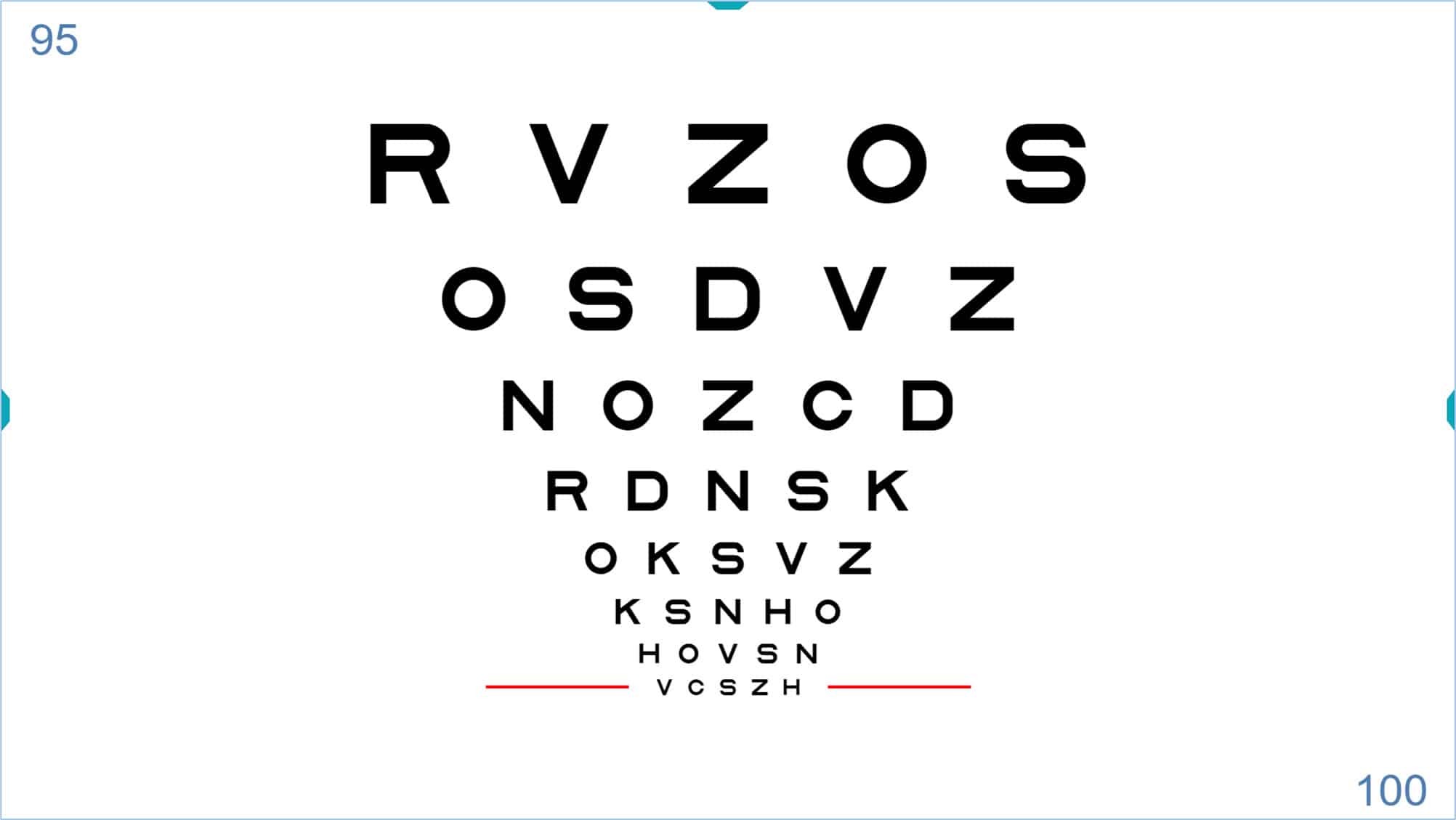 The above figure also shows the provisional automated VA score in the upper left corner of the screen (95 VAR), since the patient is able to read all the letters from the preceding row of VA 95 VAR.

Now suppose that the patient correctly reads three letters of the row VA 100 VAR. The key number “3” will be pressed and the following screen will be displayed with an additional row of letters, also pointed to by the red lines: 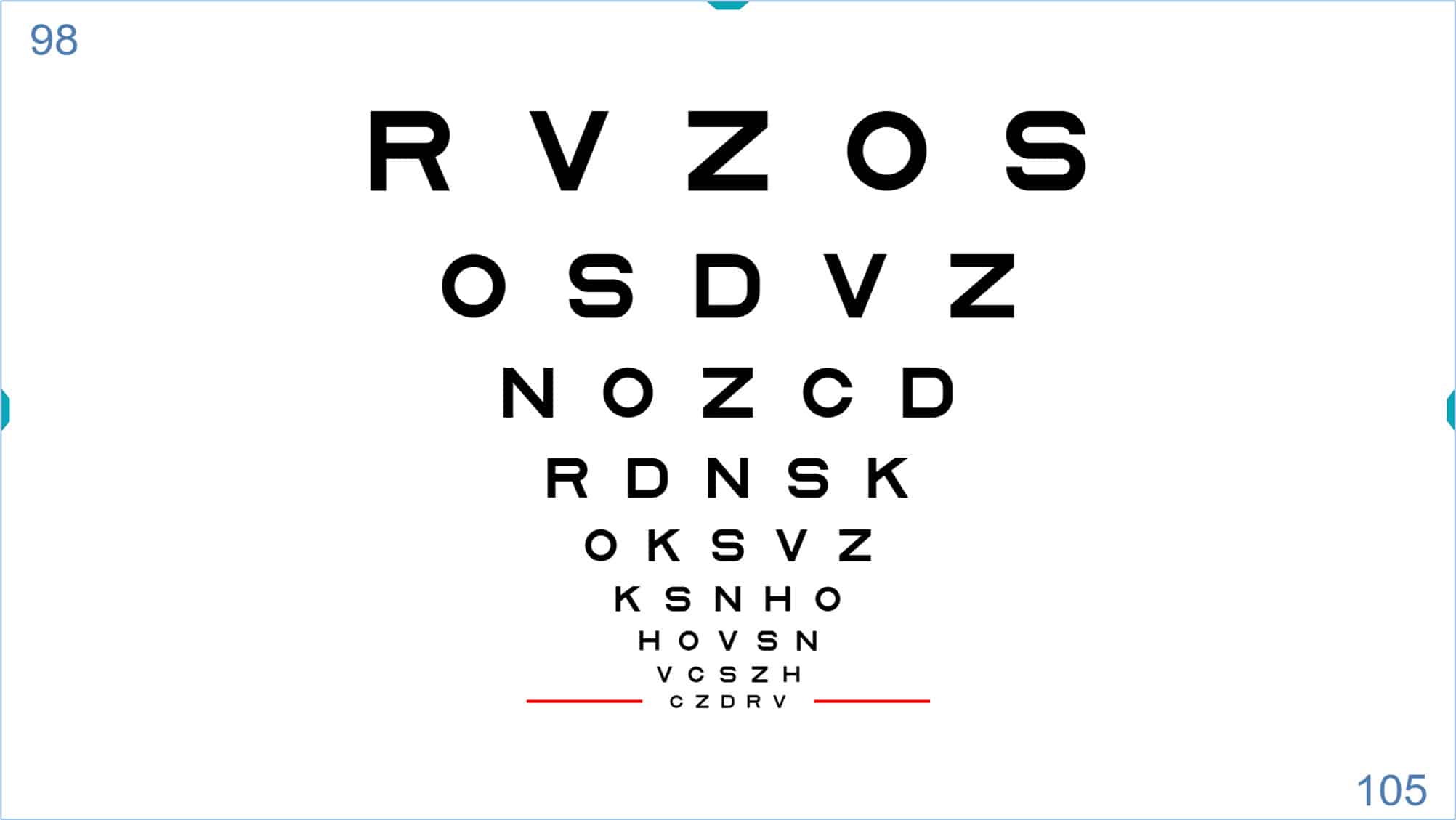 Assuming the patient misses all the letters of the bottom row (105 VAR), the number “0” will be pressed. At this point the VA score results will be displayed in the five different notations: LogMAR, Decimal, VAR, Snellen (metric) and Snellen (imperial). 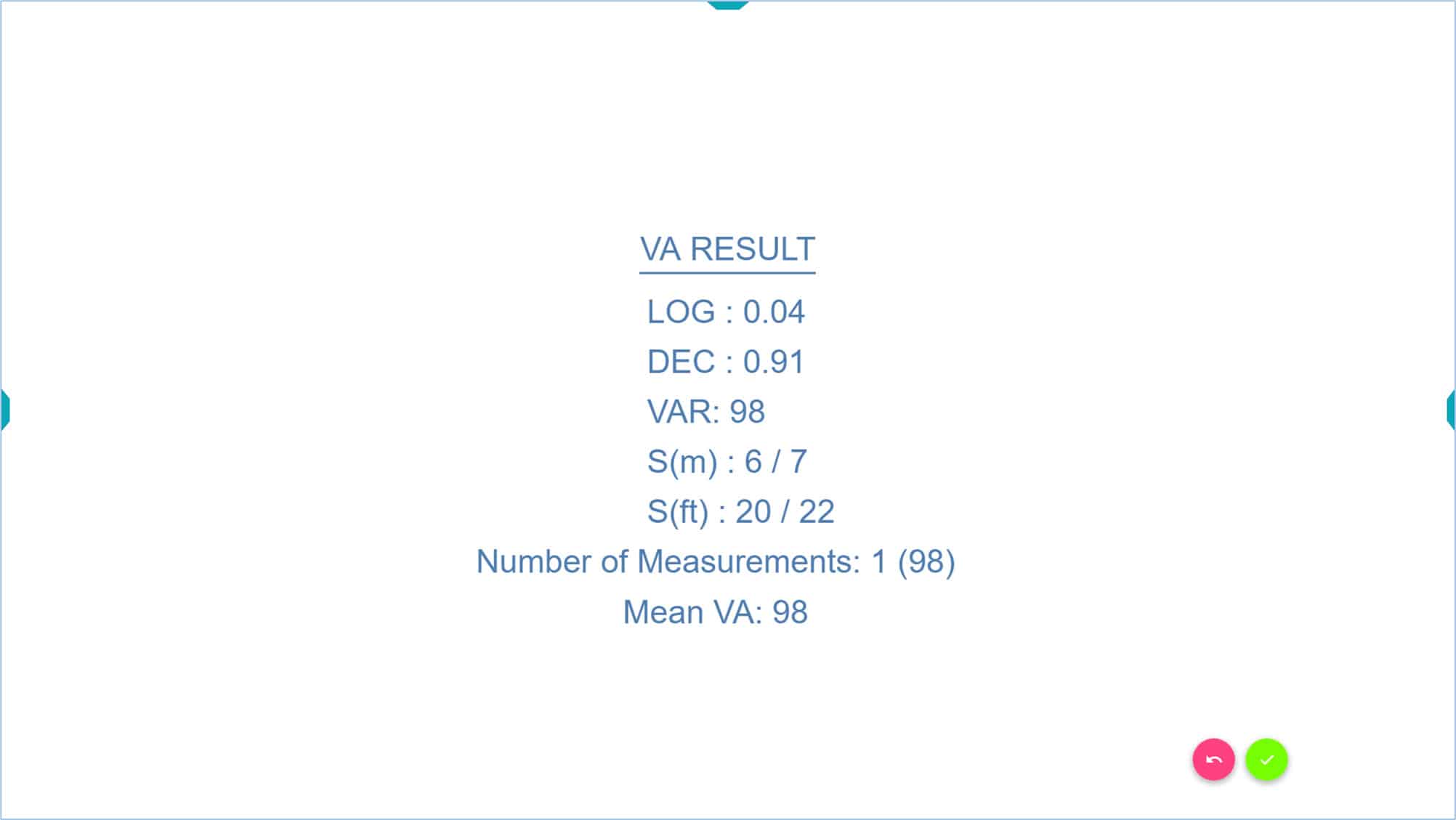 Once the automated VA measurement has begun, the examiner must press the number of letters per line correctly identified on the keyboard (from 0 to 5). If another key is pressed the automated calculation is cancelled and should be repeated. A message in red will be shown on the screen indicating the automated measure is cancelled.

To improve accuracy, it is recommended that at least two consecutive measurements of VA are taken per eye and averaged. Accordingly, once the first measure is completed, the examiner will just press the “Enter” key to return to the VA chart. The row of letters from which the automated routine was previously started will automatically be pointed to by red lines (in our example 95 VAR), but with a different combination of letters to avoid memorizing (see next image). 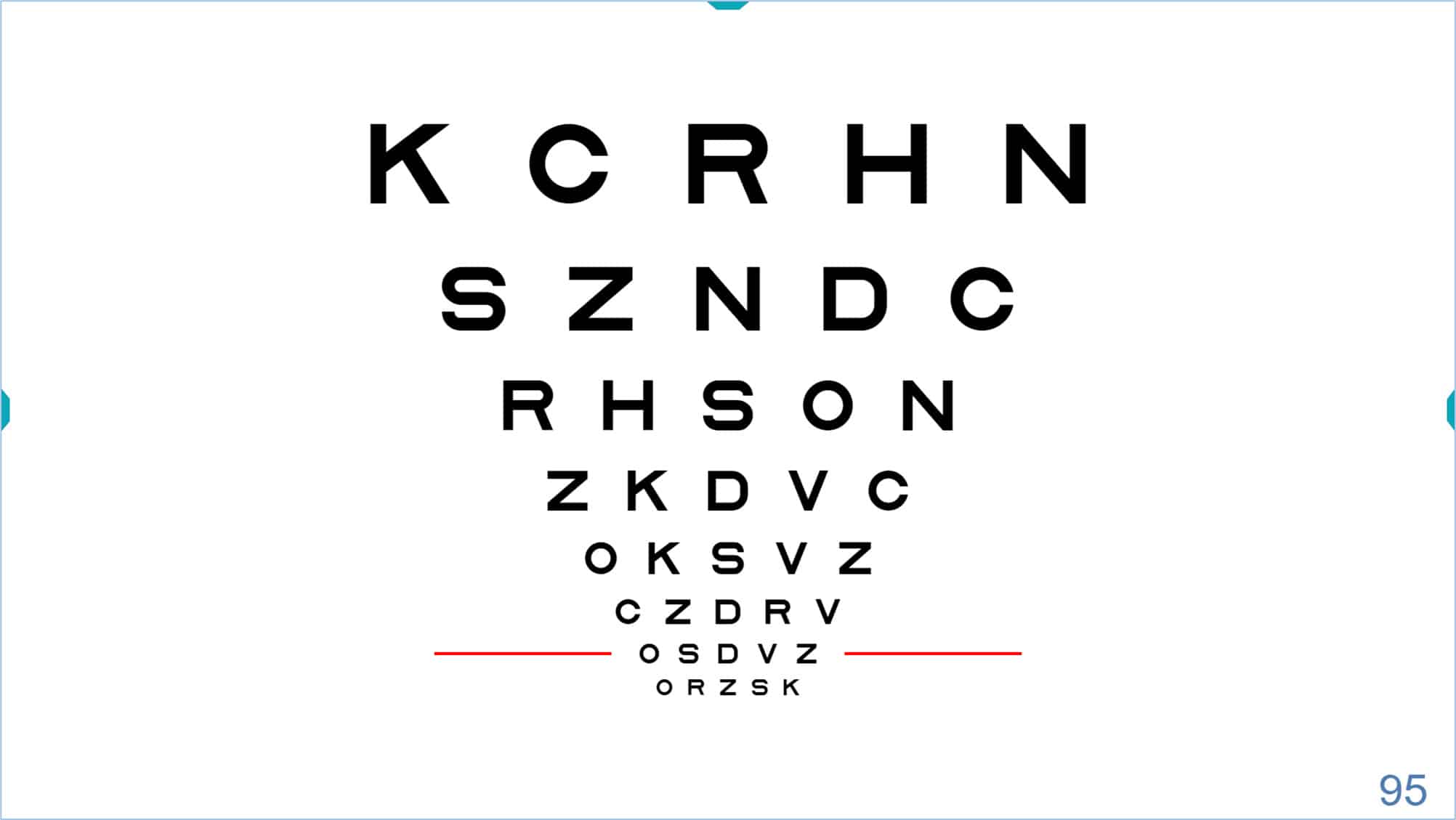 This allows performing automated consecutive measurements of VA quicker, as the process is repeated from the same row of letters.

The automated measurement can then be repeated several times, and the unit will calculate the average VA and Standard Deviation values after each measurement. 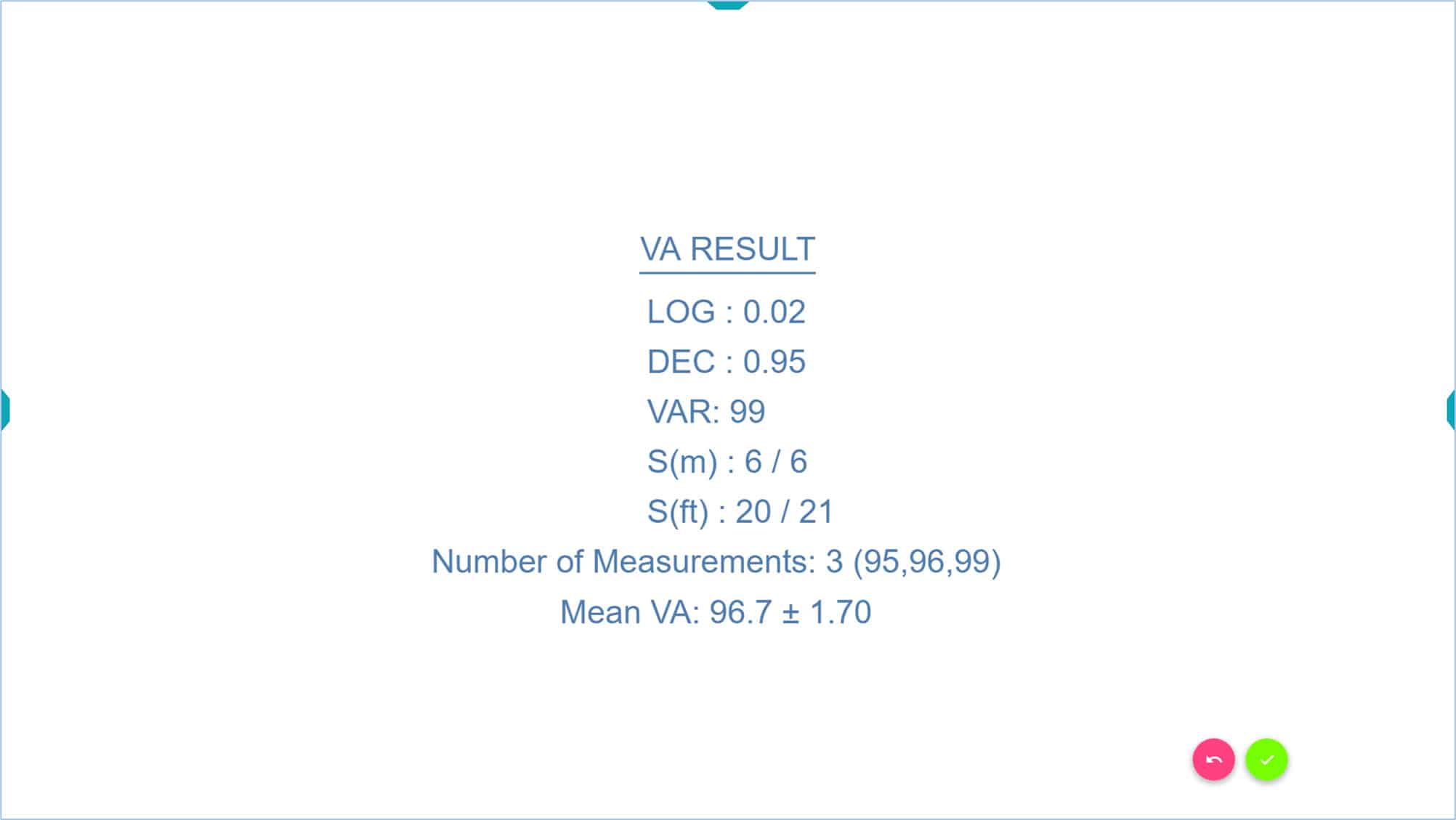 Taking 3 to 5 repeated measures is also useful for precise monitoring of VA changes over time, as it allows determining the patient’s own criterion for significant loss of vision at subsequent consultations, which is indicated by the standard deviation. A change in the patient’s visual acuity greater than two standard deviations can be considered a significant change.

It should be noted that the automated VA measurement method can only be triggered from rows showing five letters (or symbols). When letters are very large, depending on the size of the computer screen employed, it is not possible to fit 5 letters per row.

The automated VA measurement can be stopped any time by simply pressing on the “Escape” (Esc) key to return to the default VA chart starting screen.

The combination of the letters can be changed randomly anytime by pressing the “Z” key, for example, when changing the eye under evaluation.