The Optonet Vision Unit incorporates an automated method for VA testing designed to simplify its use, avoid errors and improve reliability. Basically, it consists of asking the patient to read the letters until four or more mistakes are made on a line of five letters (or symbols),1 while recording the responses by pressing the number of letters correctly identified on the computer keyboard. If patients are not sure of any letter, they are strongly encouraged to guess.

A letter by letter scoring system is applied using the Visual Acuity Rating (VAR) notation proposed by Bailey.2 The VAR scale is a simple transformation of the logMAR scale by this formula: VAR = 100 – 50(logMAR).

VAR represents an alternative system which assigns one point to each letter read correctly. This is simpler and more intuitive than the logMAR scale.

Accordingly, every time the patient reads a row of five letters, the examiner simply counts the number of letters correctly identified and presses the appropriate number on the computer keyboard (0 to 5, or in the “Optonet Remote” App screen). When the number “1” key (four mistakes) or “0” (five mistakes) is pressed, the software calculates the final VA score automatically and displays the results on the screen (in different VA notations). The procedure also stops when the patient reaches the smallest row of letters of VA 115 VAR (Snellen 6/3, 20/10). 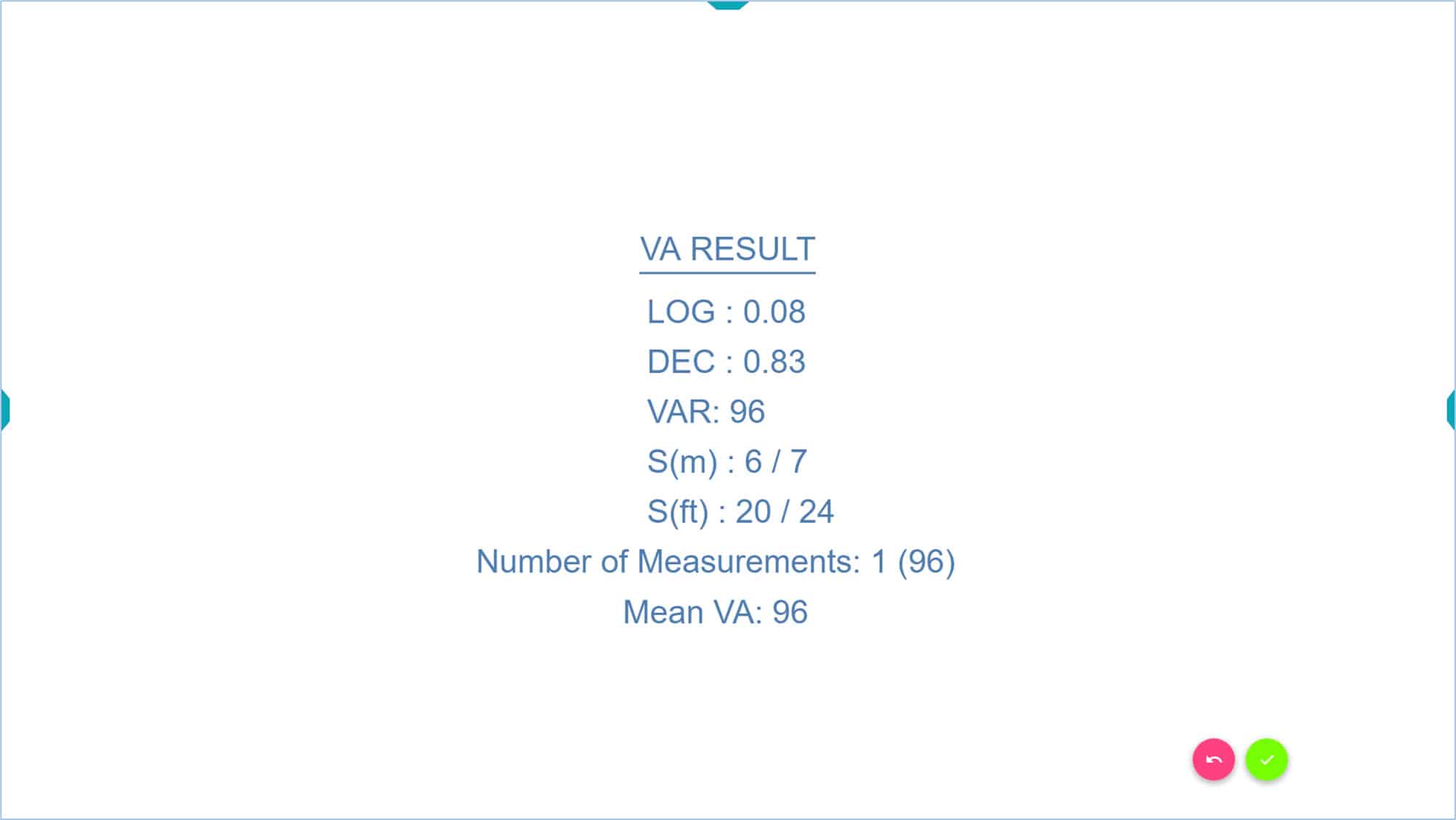 This termination rule of stopping after four or more mistakes is employed by default in the following VA charts: ETDRS (Sloan letters), Bailey-Lovie (British letters) and Symmetrical letters. The rest of the VA charts employs a termination rule of three or more mistakes by default, since there are fewer response alternatives to choose from, and therefore it is much easier to correctly identify a symbol at random.1

The Optonet Vision Unit allows the individual configuration of the termination rule for every chart, through the options setup screen, if desired.

The Broken Glasses chart constitutes a four-alternative, forced-choice (four-AFC) task (smiling face with red, blue, yellow or green cap). Similarly, the Tumbling E is a four-AFC task, (right, left, up and down), whereas the Landolt Ring could be a five-AFC (right, left, up, down and oblique) or an eight-AFC (plus four oblique positions) depending on the configuration chosen. The Round Numbers chart is a four-AFC task (8, 9, 6, 5) and the Square Numbers chart is a five-AFC (2, 3, 5, 6 and 9).

The automated VA procedure consists of five attempts for each level of VA and for every chart. This is explained in detail later in this protocol.

Note: The Optonet vision unit has been designed according to international VA chart standards. However, it should be calibrated before VA testing is carried out.

Please review How to check if my charts are well calibrated?